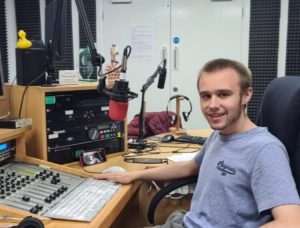 A CoventryCollege student with autism has taken a step closer to becoming a full-time radio presenter after landing himself two slots at the city’s leading community station.

Creative Media Production student Conor Sturmey is the new presenter of Hillz FM’s Local Artist Chart Show every Friday between 12pm and 2pm, which plays the latest top 30 tracks from singer-songwriters from across the city.

The move comes after Conor impressed station bosses with his other weekly show, which takes place every Wednesday between 11am and 12pm, where the 19-year-old plays popular music and shines a light on positive news stories.

It’s a step in the right direction for Conor, who after completing his Level 3 Diploma in Creative Media production at Coventry College in 2022, has set his sights on a presenting role with a BBC Radio station.

He said: “I love spreading positivity to the general public and I’m a bit of a weather nerd, so I feel that radio is the ideal platform to exercise these passions of mine.

“More importantly though, I want to inspire those with autism – and people generally – by showing them that they shouldn’t let anything get in the way of what they want to pursue, and if something interests them, to give it a go at least once.

“Before I got in front of a microphone I didn’t think I could do it, but as soon as I tried it I loved every second of it, and now I’m practicing every week.

“Before I took the Creative Media Production course at Coventry College I didn’t know what I wanted to do as a career, but it has really opened my eyes to a newly-found passion for radio.

“The ultimate dream when I eventually leave college would be to work at a local BBC Radio station.”

He said: “Conor has an unwavering desire to learn and challenge himself, and I wouldn’t be surprised to hear him on the mainstream airwaves over the coming years.

“He is a fantastic role model for other students, and I know everyone at the College is backing him on to do well in the future.”

“Conor is an asset to the station and is a representative of our young people and member of the Hillz steering group, feeding back ideas on the station’s output.

“It has been a very positive journey for Conor as he has developed his confidence and skills as a radio presenter. Hillz is very proud of all he has and continues to achieve.”

Working Actively to Change Hillfields Limited.
Charity No. 1112123
Registered in England and Wales.
Company No.3548462